Ever since Jose Mourinho led the blue half of Milan to European glory, the club has hit a stagnant point in their attempts to relive those glory days. 12 manager changes in 9 seasons with the league table positions in those seasons being, more often than not, pretty underwhelming, we can say that Inter haven’t had the best time staying at the top.

Rafa Benitez replaced Jose Mourinho after the Portuguese swapped the then Italian and European champions for Spanish giants Real Madrid and what followed for Inter could be considered as a pretty below-par era in their rich history. The transition from someone like Mourinho to someone like Rafa Benitez was always going to be tough for a squad since both are very different managers with very different personalities. Benitez was sacked in December of 2010 and Inter just haven’t been the same ever since.

Fast forward to 2019 and Inter have just sacked their 12th manager in Luciano Spalletti since that historic treble-winning season. Spalletti did a fine job with the squad he had at his disposal. He brought Champions League nights back at Inter, led them to a strong 4th placed finish and definitely steadied the ship for his successor. Rumours suggest that the reason Spalletti lost his job was due to influential dressing room players losing trust in the manager.

It was time for a change at the San Siro, someone to take this back to its glory days, the board then turned to former Chelsea manager, Antonio Conte.

It was the summer of 2011, and Conte had just joined Juventus. “Ragazzi!” Conte said, “we’ve finished seventh each of the last two seasons. Crazy stuff; absolutely appalling. I’ve not come here for that. It’s time we stopped being crap.”

Such is the gravitas of Antonio Conte. Born in Lecce in 1969, Conte donned the black and white stripes of Juventus for 13 years of his playing career. While at Juventus, he won the Scudetto 5 times, the Coppa Italia once, the UEFA Cup once and the Champions League in 1996 while also becoming the club captain.

A hardworking box to box midfielder in his playing days, the Italian has always been known for his vocal command and his leadership qualities which reflect on his CV as a manager. The former Italy manager has won at least one trophy at each of the clubs he has managed for the last 5 seasons. His managerial career, however, did not start quite so well. Conte got sacked after 9 winless games in his first stint as a manager at Arezzo. He was later reinstated by the club, but Conte could not help them avoid the drop to Serie C1.

He then went to Bari and rallied the troops to get them promoted to Serie A. That was followed by an unsuccessful spell at Atalanta where the Italian was sacked after just 14 games. The current Inter boss then went to the club where it all started for him, Sienna. He got Sienna promoted to Serie A before taking over at Juventus in 2011.

Conte won the league unbeaten in his first season at Juventus and then went onto win the league in each of the seasons he was the manager of Juventus. He also won the Coppa Italia twice in 3 seasons thus establishing the dominance of Juventus in Serie A. He then managed to get the ‘underdog’ Italy to the quarter-finals of EURO 2016 where they only lost to Germany on penalties. In April 2016, Antonio Conte was confirmed as the coach of Chelsea with whom he won the Premier League in his first season while winning the FA Cup in the second.

Conte is not scared to speak up. He left the job at Juventus and publicly stated that the reason he quit was due to the lack of financial strength that Juventus have. Even at Stamford Bridge, the Italian lost his job due to him speaking out publicly against the Chelsea board more than a few times in his last season in London.

Given the player power culture that has been at Internazionale for a long time, a no-nonsense manager like Conte could be exactly what Inter need to relive their treble-winning days.

The Italian summer window started out much like how the last season had ended- with Juventus miles ahead of anyone else. The Turin based club completed the free transfers of Aaron Ramsey and Adrian Rabiot by 1st July. Then, they went on and did something even more audacious, signing Matthijs de Ligt from Ajax for a total fee rising up to €75million euros. Even though the club had signed Cristiano Ronaldo last summer, this signing made a big statement. When was the last time an Italian club managed to win a bidding war against the heavyweights of Europe? The 19-year-old former Ajax captain was the most sought after signing of the window and he was expected to go to Barcelona, Paris or Madrid, instead, he landed in Turin to sign for the old lady.

As much as Juventus is cementing their position as one of Europe’s elites, the domestic gap between them and their rivals is ever increasing. A team that finished 11 points ahead of 2nd placed Napoli and 21 points ahead of third-placed Atalanta had just gone out and revamped their midfield in addition to signing one of Europe’s hottest prospects. Juventus were looking well on their way to win another Scudetto, how was anyone supposed to keep up with the giants?

5 weeks and 2 Serie A games later, the picture doesn’t look so clear. Antonio Conte has arrived at the San Siro and cleared out anyone and everyone who would come in his way of winning trophies with the Nerazzurri. The former Juventus manager made it pretty clear that he had no intention of using Mauro Icardi or Radja Nainggolan in his plans, the 2 players who had allegedly created the most unrest in the dressing room. The Belgian midfielder was shipped out to Cagliari while the Argentine ace, the sole shining light in an otherwise dimly lit Inter room for many seasons, has joined Paris Saint-Germain.

Conte has stamped his authority early on and has really pinpointed his targets. He had been a long admirer of Romelu Lukaku and firmly wanted the Belgian striker to lead the line for Inter. They paid around €74million for the Belgian’s services but he was their manager’s main target and they got their man. He also signed national team representatives Nicolo Barella and Stefano Sensi adding quality, work ethic and depth to Nerazzurri midfield while Diego Godin on a free transfer could also prove to be a smart deal. They also secured the services of Austrian wingback Valentino Lazaro from the German club, Hertha Berlin.

Inter have also taken a gamble by signing the Chilean, Alexis Sanchez from Manchester United, whose spell at Old Trafford has been rather forgettable, to say the least. Sanchez’s signing can go either way, he can add the quality that we all know he possesses or continue from where he left off in Manchester. Financially speaking, Inter are paying very less money to avail Sanchez’s to services at San Siro so they are not at much of a loss if this move doesn’t work out.

Inter have shown ambition in the transfer window, signing players who the manager wants while adding quality to the team. They have also replaced the troublemakers of the dressing room and while this team may take time to hit the ground running, they certainly seem to be on the right path.

Antonio Conte screams of a system that uses 3 centre-backs. That’s how he has won football matches for Juventus, Chelsea and for the Italian National football team. At Inter, he has done nothing different, preferring a 3-5-2 system in the opening two games of the Serie A season. Conte has made a few tactical tweaks to his Inter team. Antonio Candreva, a natural Winger now finds himself playing as the right wingback while Danilo D’Ambrosio has been converted into a centre-back if the first two matches are anything to go by.

This team has all the hallmarks of any other Antonio Conte team. Kwadmoh Asamoah and Candreva are both capable of giving good attacking outputs while being watchful of their positions defensively which allows Conte to give them license to push higher up on the left and right flanks respectively. While attacking, the centre-backs go wider while the central centre-back, acts like a Libero trying to initiate attacks from the back. The other 2 defenders offer cover and another passing option for the libero or the deep-lying midfielder. One of the midfielders drops deep almost into a defensive midfielder position while the other 2 midfielders have the license to push further up the field in order to support the two frontmen. The two strikers play close to each other in a sort of an angle.

The basic idea of Conte’s system is to create overloads in attack. Wing-backs pushing high up the field, the two strikers supported by 2 advancing midfielders help to create overloads in attack and find openings. If the opposition team is defending narrow, the ball is shifted out wide and vice versa. This 3-5-2 relies heavily on hard-working midfielders along with wing-backs having great attacking output and Conte’s signings reflect on the type of players he wants. Barella and Sensi are midfielders who offer great work rate while Lazaro is someone capable of working in both attack and defence.

Defensively, Conte’s teams play compact creating a low midfield block and they defend in numbers. The whole team moves together and is very organised in the way that they want to defend. The wing-backs drop back creating a straight line of midfield 5 ahead of 3 central defenders who hold their line. Conte’s team doesn’t press heavily but they do rely on counter-pressing at times to win the ball back and potentially set off quick counter-attacks to catch the opposing team off guard.

Here’s how the Inter team can look like in the upcoming season. 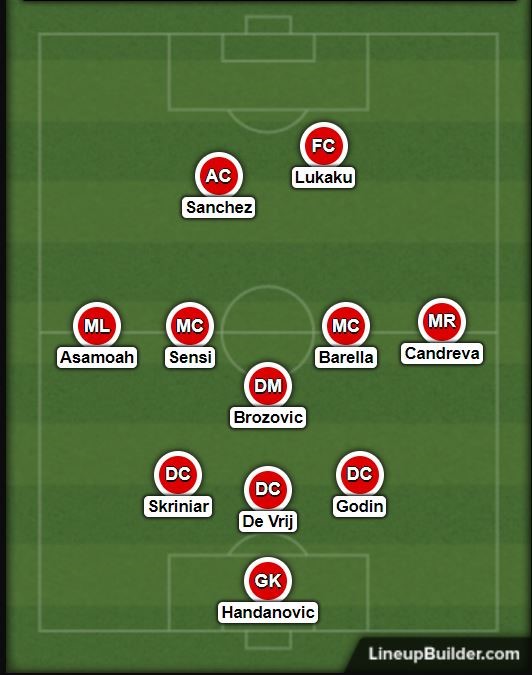 Internazionale want to go back to what they once were – the best team in Europe and looking at the way they have done their summer business, the black and blues could well be on their way back to the top. At the very least, they are the ones to watch this season as they have the potential to surprise a few teams.

Andrea Pirlo once said that Conte was the best coach he has ever worked with. “I was expecting a good coach, but not that good” said Pirlo, when he first got united with Conte at Juventus. Antonio Conte knows how to win trophies and if Inter manage to hit the right notes in the upcoming transfer windows, they could very well manage to relive their glory days in the near future.