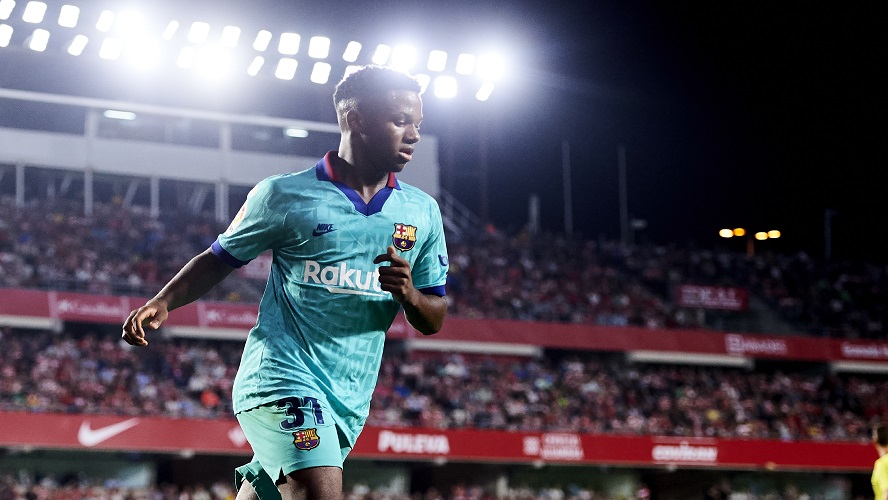 “He’s pure anarchy when he plays, and you need to give these kinds of talents liberty, not hide them out wide – they need to do what’s natural to them. He’s the jewel of La Masia.” – Barcelona Juvenil-A coach Victor Valdes.

Anssumane Fati, the Guinean teenager has become a household name in a very quick time. The talented young forward has gathered a lot of popularity amongst the Barcelona faithful. With just 5 games up his sleeves, he has managed to shock the fan-base of the Catalan Giants, with his unique style of play and flamboyance on the field at such a young age.

With the likes of Lionel Messi, Ousmane Dembele and Luis Suarez all sidelined through injuries, and the transfer of Rafinha Alcantara and Philippe Coutinho during the transfer window, Ernesto Valverde was left with little choice but to look at the club’s academy. Fati was entrusted with making the step up. At 16 years, 9 months and 25 days, the Guinean winger became the second-youngest player ever to make a La Liga appearance for the Blaugrana, falling just 20 days short of breaking the record.

His tryst with Barcelona began in 2012 when he joined La Masia from the Sevilla Academy at the age of 10. He turned down Real Madrid’s offer, who, Fati’s father claims offered better terms than compared to the Catalan Giants. He made an instant impression at La Masia and went on to score 56 goals in 29 games in his debut season. He played 24 games for the Barcelona B team and the U19s (promoted last year) together, and scored 10 goals, assisting 7 times. Fati was also the top scorer in the U19s League last term.

He made his debut for the first team against Real Betis, coming on as a late substitute for Carles Perez in a 5-2 home win against the Seville side. Barcelona fans got a titillating glimpse into the club’s future. He managed to put on a show for the fans with his skills, trickery, and pace. He scored his first professional goal in a 2-2 away draw, between Barcelona and Osasuna, becoming Barcelona’s youngest goalscorer ever and the third youngest scorer in the history of La Liga.

There has been no stopping him since. In his first career start, Fati became the youngest to score and assist in the same match, at the age of 16 years and 318 days in a 5-2 home win against Valencia. The 16-year-old made his Champions League debut against Borussia Dortmund in a 0-0 away draw, becoming the youngest player to feature for Barcelona in the competition at the age of 16 years and 321 days, breaking the previous record held by Bojan Krkic. He also became the third youngest player ever to appear in the competition.

In the explanation given by the Barcelona manager, he said that Fati is a player who can lose his man, he’s quick and loves one-on ones. He has a reputation for shooting on sight. A switch to the wings helped him showcase an obvious talent for picking out a pass. He has a few tricks up his sleeve as well. His goal against Osasuna proved, Fati has the ability to be a threat in the air too. The youngster has shown that he has incredible vision and even an ability to control play from midfield. However, it’s Fati’s versatility as a player and natural talent that makes him unique amongst his other counterparts.

Speaking about the boy wonder Albert Puig, La Masia’s former technical director said “He can play at 9, 11, 7, 10. He’s very versatile. It makes a difference. He’s fast. He’s got a great imagination. He’s got this natural talent… It’s very important – this kind of player who plays so freely on the streets for hours and hours. It was the same with Messi as a kid, although Messi is obviously different in other aspects. Added to this his natural talent helps to make the player he has become.”

However, the teenager has been criticized by others for his decision making and for his perceived selfishness. Some feel that the youngster always prefers to go for a goal himself rather than pass the ball to a teammate and create a goalscoring opportunity. Given his young age, he still has a lot to learn and it is highly likely that his decision making will improve significantly with time.

The youngster’s rise to the first team has shown that his talent and versatility are there in abundance. There has been a lot of excitement surrounding the striker after he became the youngest footballer to play for Barcelona in more than 80 years. The great Lionel Messi himself, is fifth on that list, making his debut for Barcelona at the age of 17. Spain’s interest in Fati, via the RFEF, is also nothing new as they’re aware of the fact that Fati is also eligible to play for Portugal but the player has made a decision, to play for the Spanish national team. He was recently granted Spanish citizenship which makes him eligible to represent Spain at the highest level.

It would be fair to say that it is rare to see such a young football talent thrive in such competitive and tough football competitions. Fati’s future in the team is scintillating, he’s already been compared to the likes of Lionel Messi. Having said that, he has a long road ahead of him and a lot of nurturing is still required to become a world-class player.