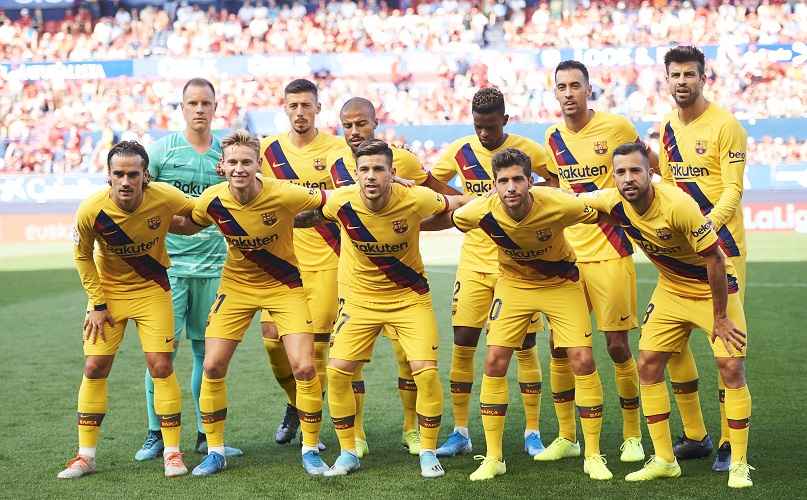 Three games, three different faces of Barcelona. While in the past two seasons Valverde’s team was built upon the solidity in the domestic competitions, the start to the new campaign has been a rollercoaster for the culés. The Spanish boss has tried to implement a fresh and renewed idea into his side, much closer to positional football than before. The return of Lionel Messi, Luis Suárez and Ousmane Dembélé will determine whether the plan changes with them on the field or not, but in the three league fixtures so far there have been some common traits regarding the occupation of spaces. Be that as it may, with the different set-ups from their rivals, there have been significant modifications in each of these duels, which resulted in quite distinct collective displays. Frustration with the opening loss at San Mamés, ecstasy with the thrilling night against Betis, and indifference at El Sadar. Contrasting images that offer some hints of what the Barça of 19/20 may look like, but that also leave some unknowns that will only be resolved with time.

In matchday 1 of La Liga, against the expected aggressiveness from Athletic Club in front of their home crowd, Valverde opted for De Jong as the holding midfielder and Sergi Roberto and Aleñá acting in more advanced positions as the central midfielders. Nonetheless, the locals managed to nullify the presence of Frenkie as Raúl García man-marked him and they closed down all passing lanes through the middle. The Dutch 22-year-old was left isolated in the centre of the park, and the responsibilities of the build-up fell on the shoulders of Piqué and Lenglet.

The distance between the defensive duo and the interiors were excessive and the centre-backs were unable to connect with the front three. Barcelona were forced wide with Los Leones’ narrow formation at play, but full-backs and wingers (Griezmann and Alba on the left, Dembélé and Semedo on the right) seemed to disturb each other and were too rigid in their respective flanks. Only the injury to Suárez and the introduction of Rafinha added more fluidity and mobility upfront. Rafinha played to the changed leg and dropped deep to free up space in the final third.

At half-time, Rakitić replaced Aleñá in another impactful substitution from El Txingurri. The Croatian provided support to De Jong and was the intermediate step between the backline and the attack. Still, the central lane was too overcrowded and the visitors had little attacking threat on the wings. Griezmann was asked to be take up Suárez’s responsibility, pushing the opposing central defenders back, but they didn’t get intimidated a single bit as they tracked Antoine’s movements too easily. With an experimental midfield and the inability to create clear goalscoring chances, Athletic got a valuable win through a wonderous moment of individual brilliance from Aduriz and their solidity to neutralize Barça’s tactics.

Against Betis, the characters and opponents were different, but the intention of having the interiors quite high up the pitch remained the same. On this occasion, Busquets was the pivot and Sergi Roberto and De Jong the interiors. All the same, Sergio wasn’t as isolated as Frenkie was in the previous clash. Why? With Betis’ defensive system, Loren and Fekir worked together to block the connections between the centre-backs and the defensive midfielder, but the full-backs, Alba and Semedo, were often off-mark and could link up easily with the wingers, Rafinha and Carles Pérez, and then with the midfielders.

Barcelona moved the ball at a much higher speed, partly thanks to the mobility, energy and mental agility of Griezmann and Busquets. The former, even if he, in principle, was the centre-forward, operated mostly as a false 9. He wasn’t caged in the penalty area, and gave oxygen to the culés and provided fluidity to the ball circulation with precise and incisive one-touch passes. Meanwhile, Sergio was the key to Barça’s effective high pressing, closing down spaces, dispossessing his enemies and even assisting Alba for the fourth goal. Busquets feels more comfortable when he’s near the opposing box. And when Busquets is ‘happy’, Barcelona notices it – 5-2.

The third and last test before the International break came at El Sadar. Osasuna’s approach was closer to Athletic’s than to Betis’, and, once again, Valverde’s men struggled to take the ball playing against an intense and aggressive team. Ernesto repeated his line-up, yet Chimy Ávila pressed one of Piqué and Lenglet, and Brandon looked after Busquets. Fran Mérida and Oier were responsible for De Jong and Roberto, while Roberto Torres and Rubén García tried to stop Alba and Semedo.

Barça’s centre-backs had to create from deep, and it was Lenglet who usually carried the ball and distributed. Given that he stood at the left-hand side of the defence, the visitors progressed mostly through that flank. 54.6% of the Catalan’s attack were down the left, compared to 22.1% through the middle and 23.3% down the right-wing. Semedo offered very little and this kept the right flank misused. At the break, Valverde decided to take off Nélson and introduced the 16-year-old winger Ansu Fati. Sergi Roberto was moved to the right-back spot despite he would be deployed almost as a fourth midfielder in possession. Some minutes later, Arthur Melo was subbed on for Rafinha. This added more control and activated their offensive threat. Unlike in the previous season, Arthur was more decisive in the final third, even scoring a goal, and acted as the advanced central midfielder Valverde had been experimenting with in pre-season.

It is difficult to predict what will Barcelona’s tactics be for the new term given that their best and most decisive player, Messi, is still unavailable. His quality and positioning will change many things once he’s back fit, but there are a few notes we can make already from the first 3 La Liga matches. High interiors and wide wingers maybe some of the identifying traits of the 19/20 Barça, though there still is a lot of work that needs to be done in the training ground. Some footballers, like Semedo or Dembélé, need to make a step forward and acquire the knowledge they are missing to become essential for the Azulgranas, while De Jong and Griezmann are still getting adjusted to their new manager’s demands.