Ligue 1 has often been an under-covered league in football writing and journalism, however here at EADF, one club’s performance this year has shocked us both on and off the pitch. Despite finishing bottom, Toulouse would have been thankful when the LFP (The Ligue de Football Professionnel) decided to put the club out of their horrific misery of a season.

The story may remind Premier League fans of the famous 11-point Derby County campaign in the English top-flight. Yet that arguably pales in comparison to a season of death threats, losses to amateur sides and the worst winless run in a club’s history. Travel back to July 2019 and things looked far more promising for the south-western French side.

Toulouse had finished the previous season in 16th spot, 4 points above the relegation playoff spot. For the upcoming 2019/2020 season though, Toulouse had been tipped to improve. Manager Alain Casanova was looking to build in his second year at the club, signing €8m Wesley Said, who had 4 goals in 25 league starts from the wing for rivals Dijon in the previous year. Said made up a squad also featuring Ibrahim Sangare, who featured on GetFrenchFootballNews as “The Talent that the Premier League missed” in August 2019. A powerful box-to-box CM whose statistics had the-then 21-year-old compared to Yaya Toure. Despite losing CB Christopher Julien to Celtic, the mood was upbeat.

The positive buzz around Toulouse was reflected in plenty of Ligue 1 predictions in August. TheFootballing.com did an in-depth preview of every French team and predicted Toulouse to finish 15th and well clear of relegation. The start to the season was kind to Toulouse, as they picked up 7 points from 12, with wins over Amiens & Dijon, and a draw away to Stade Brest. Their one loss was 4-0 away to PSG, something that can be forgiven for any club in Europe.

By the end of September, Toulouse had picked up a further 2 points in draws away at Saint Etienne and FC Metz, mixed with 2 losses to Angers and Nimes. The last game of the month, 2-2 away at Metz, featured an embarrassing goal to concede. Left-back Issiaga Sylla gave the ball away needlessly and the rest of the defence couldn’t organise themselves quickly to stop the team going 1-0 behind. This was the first major showing of the plague that would grow rife in southern France, the plague being abysmal defending. At this point in the season, Toulouse sat on14th position and had already conceded 12 goals in 8 league games, not the worst record but perhaps hinting at the results to follow.

October was when the eyebrows around the club began to raise, as Toulouse would end the month with a new manager. This was due to the first game of the month, which was a 3-1 home defeat to Bordeaux on October 5th. Just 6 days after the game and midway through the ongoing international break, news broke from L’Equipe that the manager Alain Casanova had quit. Before leaving, he mysteriously told the 1st team squad “I can no longer live up to my responsibilities, or work in good conditions”. It soon became apparent what he was talking about as Casanova quit after receiving written death threats, which even led to a criminal investigation and arrest.

The anger from the fans came from their feelings towards the club’s downfall, as Toulouse started the 2010s as Champions League football contenders and had since regressed lower down the table. The fans’ anger was a low priority for club owner & President Oliver Sadran, as he searched for someone to replace Casanova and stop the ship from sinking. He turned to Antoine Kombouaré, who had saved Dijon from relegation in the previous season.

The 56-year-old started very well, surprisingly beating Lille 2-1 in his first game. Former Arsenal player Yaya Sanogo and captain Max Gradel fired Toulouse to a victory they hoped would be the start of positive things to come. The defence appeared to have been fixed overnight, with Understat’s expected goals metric suggesting the opposition side led by Victor Osimhen had created an expected goal rating of just 0.72, or in other words, not enough chances that would likely have led to a single goal. The next match, a Coupe de la Ligue game against Ligue 2 side Niort, would be the last victory Toulouse would taste in all competitions for the rest of the season.

From late October all the way through to early February, Toulouse would pick up zero points. They lost to everyone, from a 3-0 away loss to Montpellier, to a 1-0 defeat to a non-professional side called St-Pryve St-Hilaire. This was the game that convinced Oliver Sadran to bid farewell to the second manager of the campaign as Kombouaré left in the early days of 2020. He departed with a record of 2 wins and 11 losses. This followed a sensational statement Sadran gave in late December, which read as: “What we are offering on the pitch is not worth paying for”. He had just refunded all season tickets for Toulouse fans.

Even after Kombouare was sacked and youth team coach Denis Zanko took charge, the loss to Brest in his first match in charge on January 11th showed the damage the dreadful run of losses had done to the players. Previously mentioned left-back Sylla lacked the motivation to track the opposition winger, as Toulouse gave away 10 shots inside their own box, leading to 5 goals vs their 2. This was their worst defeat of the season, and Brest’s goal haul made up just under 14% of their eventual season goal total of 36. 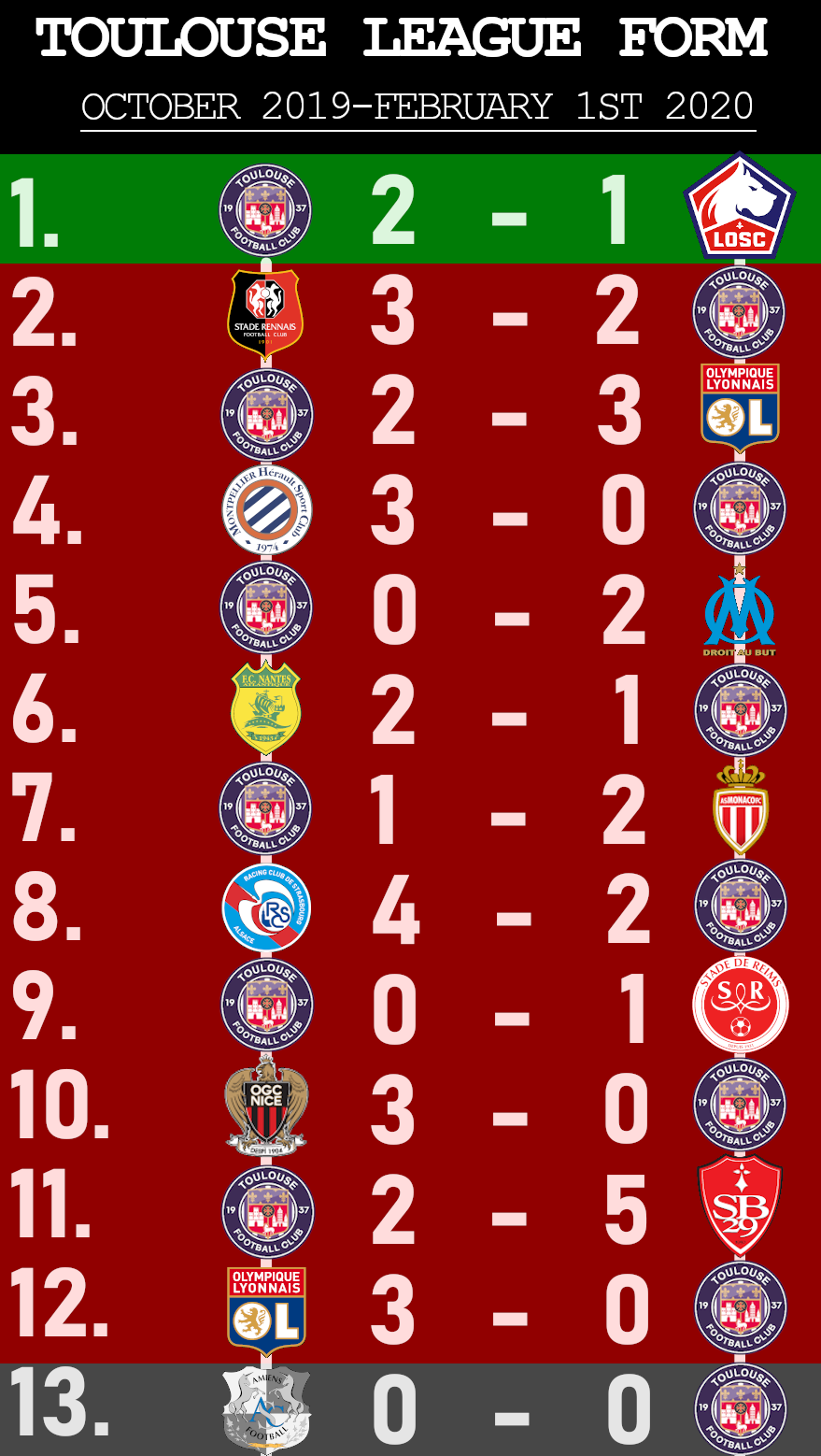 Zanko and Toulouse would win their first and last point of the new year, in a 0-0 draw against Amiens in February’s opening matchday. Before the season was cancelled after their final game, a 2-1 loss to Dijon, the facts since October gave grim reading. In all league games after their victory over Lille, Toulouse scored just 11 goals in 18 matches. In that time, they conceded 42. Since the cancellation of the Ligue 1 season after matchday 28, huge changes have begun to loom over the club.

An InsiderSport article reports that Toulouse and Sadran have entered talks to be taken over by a US investment firm, with the owner even stating that the firm, Redbird, have what it takes to return Toulouse to glory. That dream though is in danger of being tarnished. Many important first-team players are looking to move on. Sangare has been linked to Arsenal and reportedly identified as a transfer target (beIN Sports), and should he leave the fee will be minimal as the Ivorian’s contract runs out next Summer. That is along with top scorer Max Gradel’s contract which is also about to expire. A huge rebuild is needed at Toulouse, and 2019/2020 will go down in history as the most damaging season in the clubs’ 83-year history.