You are here
Home > News > The Arsenal Monthly: September 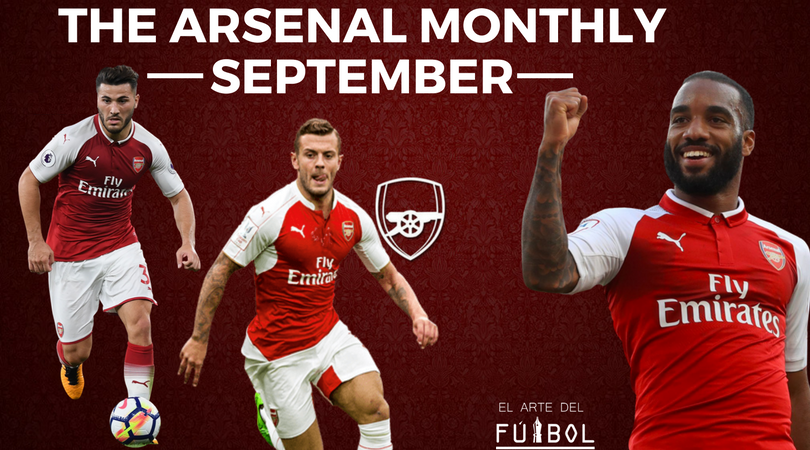 What an eventful month in the world of Arsenal Football Club. It has been a much better month compared to the one that they had in August. After that humiliating loss to Liverpool, Arsenal have picked themselves up and have remained unbeaten in September in all competitions. They have had 3 Premier League matches, 2 in the Europa League and one in a Carabao Cup. Arsenal are 7th in the table, 6 points adrift of the top at the end of September. In the Europa League, they sit atop their group.

After that defeat at Anfield, Arsenal needed to respond decisively and they did, a confident and controlling 3-0 victory over Bournemouth is just what they needed. Danny Welbeck contributed with two goals, one of which was an absolute beauty of a finish, it was much harder than it looked. Lacazette also got among the goals, bagging one. Alexis did not play much part other than a second half substitute in that game. The fact that Arsenal have the option to bring on players of the quality of Giroud and Sanchez off the bench just shows how much squad depth they have this year.

Next came Koln in the Europa League. It seemed like a straightforward game and looking at the score line one might say it was, but it took a second half comeback from Arsenal in order to beat the German side. Arsenal were behind at HT and it took a tactical change from Wenger to switch to a back 4 for the remainder of the game to do the trick. Arsenal stormed back with a powerful volley from their tank of a Left back, a wonderful, solo goal from Alexis and a goal from Bellerin to win the match and turn it upside down.

Then was the big one, Chelsea vs Arsenal. Most experts expected Chelsea to win considering the shape of Arsenal’s team at the time. But they couldn’t, Arsenal’s defense showed up and they showcased how solid and rugged they can be when they want to. Morata was not able to continue his impressive goal-scoring form and was stopped on numerous occasions by Mustafi. Arguably Arsenal had the better chances and could’ve even left with a win if it wasn’t for their finishing. This was a real confidence boost, not because of the result but because of the performance that Arsenal put in. The only negative was the injury of Danny Welbeck. After a good start to the season, yet again an injury has hampered his progress.

Onto the Carabao cup and Arsene Wenger gave a chance to some of the players who are desperate to make an impression. The biggest positive from the game though would have been the fact that Jack Wilshere played the full 90 mins in the game. His through ball for Giroud could’ve resulted in a goal of the season contender if it wasn’t for the crossbar. Luckily for Arsenal, Theo Walcott’s goal was enough to get them through to the 4th round of the Carabao cup.

The last Premier League encounter was against West Brom at home. Although Tony Pulis has a miserable record at the Emirates, his teams are always set up to be disciplined in defense and quick on the counter, which usually proves tricky for Arsenal. That held true in the first half of the game with Arsenal conceding chances to West Brom leading to them even hitting the post. In spite of that, Arsenal got the lead through a bit of fortune though as Lacazette pounced on a rebound from an Alexis Sanchez free-kick. Arsenal turned up the ante in the second half and added to their tally through a penalty could’ve gone either way. Even though Arsenal’s goals may be from set pieces, their second half domination showed the difference in class between both sides.

The last match of the month was a Europa League encounter with BATE Borisov in Belarus. This is a place where clubs like Bayern, PSG and Roma also could not manage to win. Arsenal though, made it look easy. They absolutely ripped apart the BATE defense in the first half with Walcott getting 2 goals and Rob holding getting his first goal. Another record was set for Arsenal as Olivier Giroud became part of the 100 goal club at Arsenal. Probably the brightest spark from that match was the performance of Jack Wilshere. He was instrumental in a more attacking role for the team, pulling the strings for most of Arsenal’s attacks. The scoreline only read 4-2 to Arsenal but it could have been so many more.

It has been another month of speculation for Arsenal regarding the future of their star men Ozil and Sanchez, with reports earlier in the month indicating that cometh January, Alexis could sign a pre-contract with PSG and Man City may not be able to compete with their wages. Although most Arsenal fans have accepted that Alexis is going to leave anytime in the next two transfer windows, it would be preferable to see him go to a foreign league.

Although arguably Alexis’s loss would be greater than the loss of Ozil, the choice of club for Ozil is what could really hurt Arsene Wenger personally. Reports emerged from Germany claiming that Ozil’s choice was to see out his contract at Arsenal and reunite with former manager Mourinho at Manchester United. This would be a huge mental blow for Arsene Wenger. He brought Ozil to England and taught him how to play in England only to see Ozil go away to Mourinho. That would be a disaster. Mourinho and Wenger’s feud is known to all and this would add a lot of flame to the fire.

In a lighter talk in the paper, it has emerged that Aaron Ramsey could be a potential Arsenal captain for the future. Mertesacker is retiring this year, Cazorla is still injured and Koscielny is 32, which means that Arsene Wenger needs to give thought about the future leader of this squad. Ramsey has been at the club since about 10 years and knows the club inside out. He has made 215 appearances for the club and would seem like a good choice for captain.

Another thing worth a mention would be the gesture by the club for Gareth Barry. Arsenal presented him a shirt signed by all the team members with the number 633, citing the record breaking number of Premier League appearances he has made.

In a statement that Arsenal fans have seen every season now, Ivan Gazidis has vowed to back Arsene Wenger in the transfer market after the club posted record turnover in excess of 400 million pounds. Usually, the expenditure in the transfer market is never to the expectations of the fans and we will have to wait and see whether this is the same.

In the boardroom another battle for ownership is about to take place with Alisher Usmanov looking to acquire majority shareholding in Arsenal football club from Stan Korenke. He had a bid rejected and is preparing a new one. In the meanwhile, Stan Kroenke himself is looking to oust Usmanov to boost his shareholding to 97%. This could spell disaster for the club based on what has already been experienced under him since 2007.

All in all, on the field it has been a good month for Arsenal following the apocalyptic August that they had. Progress has been made on the field and Arsenal just need to keep this momentum going.

Sanchez and Ozil Image via PremierLeague.