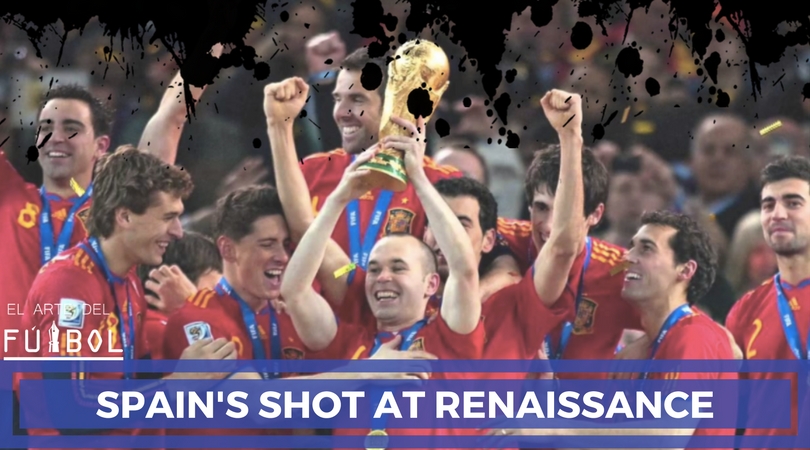 The long road to recovery.

Of the things that are the hardest to achieve in football, few come close to having to get back on your perch once someone comes along and knocks you off. And for Spain, it doesn’t make it any easier that that perch is the long, arduous climb back to world domination.

La Roja are the greatest national side of this 21st Century, but their failings at the World Cup in Brazil and more recently at the Euros in France put them in a strange position – their endless wealth of footballing talent makes them strong contenders for any title, yet as they take the field in Russia next year, it will be as outsiders to the ultimate prize.

Vicente del Bosque has forever etched his name into Spanish football’s hall of fame, continuing the glorious tradition of beautiful, possession-based football from Luis Aragonés. Laying waste to powerhouses of the game on the way to a treble of consecutive tournament wins, after the debacle that was the defence of their World Cup crown in Brazil, there was little doubt, even in the minds of their fiercest supporters, that it was time for the national side to bid del Bosque farewell.

Things didn’t get much better at the European Championships in France as del Bosque seemed to repeat the same mistakes before Italy exacted some revenge for the defeats of 2008 and 2012, dumping them out in the knockout stage. It was time for change.

Thus began the road to recovery, as del Bosque finally stepped down and in came Julen Lopetegui, a surprising pick considering the lack of success he enjoyed at Porto. Among other reasons, what prompted the federation to take a chance on Lopetegui was his experience at the U19, U20 and U21 levels. He knows his players well, and it has shown. An impressive unbeaten run includes 2-0 wins away to the mightily talented France and Belgium, and most recently a 3-0 humbling of Italy. Dominance in qualifiers and friendlies is all good and well, but the main event is going to be a whole different ball game. Will Spain stand up to be counted then?

They certainly have the squad to do it. Many consider David de Gea the best in the world in between the sticks. Pique and Ramos, enmity aside, provide a formidable spine, flanked by Alba and Carvajal to complete an all-star backline. As for the midfield, Spain really are in a league of their own, churning out one world-class metronome after another with almost machine-like efficiency. Up top, it’s much of the same, with a mix of youth and experience that gives them plenty of firepower.

How then, with a squad like this, have they been made to suffer so much in recent times? del Bosque simply failed to keep up with changing times. Spain won their last title about the same time as Pep Guardiola’s dominance with Barcelona was coming to an end, as teams figured out ways to nullify their attacking threat of tiki-taka. Warning shots were fired when Brazil ran riot in the Confederations Cup final of 2013, and what followed showed how badly things needed to change.

Lopetegui has ushered in that change, trying to mix and match in his search for the winning formula. Of his squad, these are the players to watch as Spain look to scale the summit again –