On the 1st of October 2017, thousands took to the streets of Barcelona, capital of Spain’s most prosperous and wealthiest region, Catalonia. This time, however, it wasn’t a procession to watch the game against Las Palmas, which was played behind closed doors. This was a procession that would mark what would possibly be one of Spain’s most significant events in modern history, Catalonia’s referendum to declare independence from Spain. The next few weeks were a period of constant unrest, with protests, arrests and general violence that shook the very region at its foundations.

To completely understand the scenario, it is important that we take a brief trip to the early 1900s. The 1900s saw the rise and fall of Spain’s twisted dictator, a certain Fransisco Franco. Coming into power in 1939, in the aftermath of the Spanish civil war, Fransisco Franco invoked a reign of terror that is only comparable to that of Sauron, or according to Shaank Naad, certain rulers of a certain religious community in India. Our buddy promised, in his own words, “to enforce a brand of traditionalist and authoritarian Spanish nationalism that harboured no expression of the distinct ‘minority cultures’, such as Catalan.” The Catalan culture, one of the region’s oldest, was forcibly replaced by the Castilian regime, with the prohibition of the language, art, and presence of anything related to it.

So where does Barcelona FC fit into the greater scheme of things?

Going by the motto, ‘Mes Que Un Club’, which translates to ‘More than a club’, FC Barcelona was the centre of the Catalan agitation. During what were rightfully called the dog years, where an entire community was on the brink of being wiped out from the map, FC Barcelona provided an outlet that was both welcoming and redeeming. The club and the society have always shared a warm relationship, the club standing for its people, and the people, the club. One of the most notable events being: the fans returning on foot after a 2-1 away win over Santander because there was a tram strike in Barcelona. Another notable event was when club legend Cruyff told the European press he chose Barcelona over Real Madrid, simply because he refused to be part of anything associated with the Francoist regime.

With this, and many more gestures, FC Barcelona won over the Catalan public. It was more than just a football club, it was a symbol of resistance against an inhumane dictatorship, and the centre of a revolution.

Things became better after the death of Franco in 1975, with liberty and peace being restored to the entire region, and Barcelona soon became one of Europe’s most successful clubs, both off and on the pitch.

Fast forwarding to 2017, tinges of the Francoist regime resurfaced, with the Spanish government resorting to violence, destroying polling booths and injuring almost 400 people. However, FC Barcelona, went on to play against Las Palmas, choosing to avoid being sanctioned and docked 6 points. However, the times have changed, with the board holding their cards close to their chests, and not coming out with a well defined stance on the matter.

This is probably because they are more than just a club, but with different context. Today, FC Barcelona is more than just a club, it is a brand and a business, catering to fans all over the world. Its identity as the centre of Catalan culture is outweighed by its identity as a global money making machine. And this is probably why the board is neutral. They don’t want to do anything that might hurt their interests as a club and a business.

However, while the board remains in a limbo, the players know where their loyalties lie. Gerard Pique, an independent Catalonia’s most vociferous defender (pun unintended), has made it clear as to where he stands. Pep Guardiola, another Catalan, and responsible for what is arguably Barcelona’s most successful campaign post 2000, has stated that it wasn’t about the referendum as much as it was about democracy in a recent video. Other Catalan players include Jordi Alba and Sergio Busquets, both capped players for the Spanish national team. 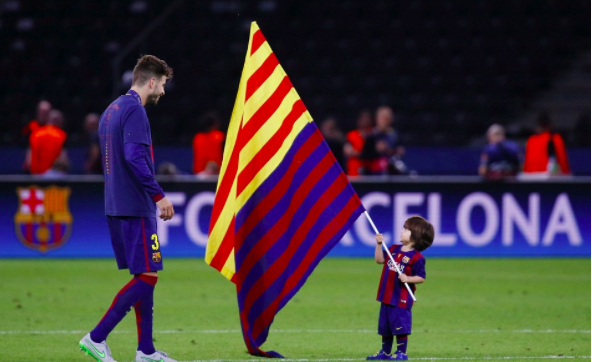 Almost a month later, an uneasy peace has set in the region, but nobody knows how long it will last. This referendum is more than just simulations of a Spanish 11 versus a Catalonia 11 on FIFA, or discussions about how ‘lit’ a Catalan eleven would be. In the event of an independent Catalonia, Barcelona would not be able to play in the Spanish first division anymore. Nor would it, to the disappointment of fans, be able to play in any league it wants, if there is an independent league in Catalonia. Even if this event was possible, this would cause complications, from travel to a potential exodus of players to other clubs.

The situation is dire for the board, and rightly so. However, the stream has forked, and FC Barcelona cannot remain stagnant any longer. Water that is stagnant, soon dries up.