After the bitter disappointment of last season, Liverpool have got their current campaign off to a flyer. Winning their opening four games for the first time in 28 years heading into the international break, it’s out of the frying pan and into the fire for the Reds as their upcoming run of fixtures could prove to be decisive, even this early on in the campaign.

Pep Guardiola may have been on to something when he said that the proper season begins after the break, in terms of teams having games every three days. With some big money additions and not a lot of outgoings, the Liverpool squad’s impressive depth will be put to the test when matches across three competitions come thick and fast in this tricky run.

By mid-October last year, Jurgen Klopp’s side were 9th in the League and dumped out of the League Cup in their first game by Leicester. Already out of the running for two domestic trophies, the worst was yet to come. 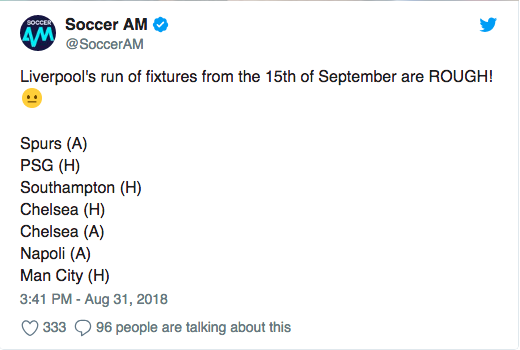 Arguably Liverpool’s worst performance of the season came at Wembley when Tottenham ruthlessly pounced on the defensive horror show put on by the visitors, thrashing them 4-1. The defeat came as a blessing in disguise, however, as Liverpool went unbeaten for the next three months. Klopp will hope they don’t need a shock to the senses this time around when they return to Wembley a much-changed side.

Upon their return from the capital, Liverpool will find Paris Saint-Germain lying in wait for a mouth-watering Champions League opener for both sides. A straight shootout between two of Europe’s deadliest attacking trios in a setting like Anfield makes this a classic waiting to happen. We need only remember what happened the last time as Klopp and his successor Thomas Tuchel locked horns in Liverpool’s thrilling 5-4 aggregate win over Dortmund in the Europa League.

After remaining in Merseyside for the game against Southampton comes the massive doubleheader against the other early season pace-setters, Chelsea. As if the long history of classics between these two didn’t already provide an engrossing sub-plot, the games will also see Klopp and Maurizio Sarri face off for the first time. The first of those two games is the League Cup opener, where both managers will likely field second-string sides before really going for it three days later at Anfield. Like the PSG game, the fascinating clash of attack-minded managers will see goals decide what will be a crunch game that could very well decide the League leaders at this early stage.

Read More | Liverpool’s Transfer Window – Is This Their Year? | Fabinho And Keita To Anchor Liverpool? |

Liverpool’s Transfer Window – Is This Their Year?

There will be no time to down tools for the team however as they pay a visit to Napoli for the second Champions League match. The Stadio San Paolo, like Anfield is notorious for its wild fans and raucous atmosphere, something Liverpool know will play a big part. With all the attacking flair still on display from their time under Sarri now mixed with the defensive nous under the disciplinarian that is Carlo Ancelotti, the Italian outfit are a seriously dangerous proposition, meaning there’s no chance of respite before the massive game three days later.

Liverpool and Manchester City met four times last season and dished out four thrillers. Whilst Liverpool did get the better of the Citizens on three of those occasions, they also suffered their biggest loss at the hands of the eventual champions. Since they last met, the focus for the Reds has been on closing the gap on the record breakers. This game will be a litmus test for that progress and whether they can really begin to think themselves as City’s challengers for the Premier League title heading into the second international break.

22 days, 7 games, 3 competitions. A minefield of a fixture list if there ever was one, and a potentially decisive one at that. Ambitious in the transfer market and quick off the blocks, Liverpool have talked the talk. Whether they can walk the walk as well, will become clear very soon.