You are here
Home > Opinion > The Casillas-Mourinho fall out

This article was first shared on Quora as “The Iker Casillas Farewell controversy” written by Sushruta Nandy.

Iker Casillas was a legend at Real Madrid who represented the Los Blancos 725 times and won multiple trophies.It was indeed surprising that such a player had to say goodbye in a press-conference without any teammates present.Shocking and utterly despicable on the part of the Real Madrid management, or was it?

Pep was creating something special in Barcelona and Perez decided to counter by hiring “The Special One” .

Casillas was a legend in both Spain and Real Madrid at this point. He held a huge amount of influence both in the dressing room and with the Spanish press.

The minute Mourinho was hired, there were reports of disagreements among the manager and the captain. Iker didn’t take too well the fact that Real Madrid would play very ‘Un-Spanish like’ under Mou.

But no further developments were made on this as Jose won the league in his second season. Nobody complains when things are going well.

Except that things weren’t going so well.

Back then, the ‘El Clasico’ was way more violent than what it is now 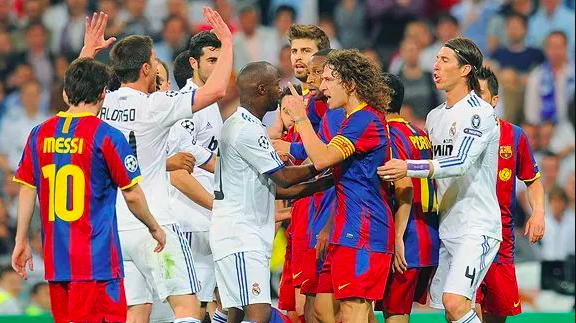 Casillas didn’t like what he saw and he called up Xavi to discuss a peace treaty. The peace treaty was signed between the captains. However, the commander of Real Madrid was displeased by this; he called the move soft . The commander was a harsh man, he believed the only way to unsettle the opponents was to be aggressive and test their mental strength via rough tackles, brawls ,etc. Contrast that with the compassionate captain and you are bound to have something boiling between the two.

Iker was benched for Adan against Malaga, which made the fans crazy. They demanded to know why such a move was taken. Iker did his best to calm the situation down.

He said “ The coach decides which team he thinks is best for each match and you need to accept the decision.”

The fans calmed down but the Spanish press did not. The next morning, every paper was calling for Jose’s head.And as we all know, Jose and the press just love each other.The following game was against Sociedad, everybody in the ground cheered for Casillas. Mourinho was under pressure from the press, the fans, and the players too.A few minutes in, Adan is sent off and Iker replaces him and puts in a solid performance that night. Iker had once again earned his place back in the squad.

There were a lot of other minor instances of this feud.When Pepe spoke up against this, he was unfairly benched for Varane.Mourinho urged the board to buy a new keeper, he never really liked players who held too much power, more power than him.Casillas reached his breaking point when he was benched again after Madrid fell 11 points behind Barca in December of that year.He began wielding his influence over the press. He criticised Jose’s play style and treatment given to certain players. This got the press and the fans talking once again.

Mourinho now went into his defensive shell, accusing Casillas of being a mole and his journalist girlfriend of spreading fake news.

“Would I do anything differently if I had the chance to do the past three years over again? I should have brought in Diego Lopez after my first year. We didn’t do enough to sign him. It’s a real shame.”

Real Madrid fans were divided into two parts after Mou left by “mutual consent”. Those that supported Iker and those who didn’t.

For the rest of his career, half the Bernabeu cheered him, the other half jeered.When half the fans don’t appreciate what you did, it would be the best decision to have a farewell.Also, Iker’s issues went far beyond his poor relationship with Mourinho, and it’s the main reason some fans dislike Casillas.Casillas ended up being a toxic personality who Spanish media adored and would defend no matter what. Casillas would use that influence over media to force managers’ hands to play him independently of his performances.

During the Ancelotti era, he forced the team to play him for 2 years despite under performing, and became a constant liability for the defensive line.When Ancelotti arrived to Madrid in 2013, his GK coach, William Vecchi, considered that Diego López should start instead of Casillas based on performance metrics. This continued the toxic situation left from the Mourinho era, as Casillas himself, and the media who supported him could not accept this outcome. Ancelotti was forced to sort this out politically by playing López in the league and Casillas in Champions League.

But of course, this toxic situation could not last for long. One of them had to leave, and off-loading Casillas was very difficult due to his influence on media as well as his massive salary. Diego López ended up leaving the club in 2014, and the club signed Navas, who had just completed a spectacular performance in the 2014 World Cup. Navas was the better keeper, but now Casillas had full control. He would become the undisputed starter in the 14–15 season, and that’s how the defensive line spent the entire season – with a liability at the back who drastically conditioned their defensive behaviour. You could see Real defenders staying back more than usual, protecting the box as if they didn’t fully trust the performance of their keeper.

Even Casillas ended up realizing that for the good of the club, his legacy, and his own mental health, he had to leave Real Madrid, which is when he finally left for Porto and—upset at the club for not defending him enough throughout the last few years—chose to leave in a way that would generate the most negative PR with that famous press conference in which he was completely alone.

Sink or swim: Can the Spanish Armada Triumph in Russia?

Casillas’ two years with Ancelotti are inexcusable and unworthy of a model pro. He screwed over the team with underperformance and made things really uncomfortable for a model pro like Diego López, who was just trying to do his job in the middle of this war.

In 2010, when Mou arrived in Madrid, he told Raúl that he wouldn’t start anymore. Raúl decided to put his club before his ego and he left Real Madrid immediately in order to not create a media storm like the one that Casillas generated.
I personally wanted Iker to get a grand farewell.

But now you know both sides of the story.

Mourinho was wrong to throw those trademark tantrums of his, but Iker did use the press to his advantage, and created unnecessary pressure on the manager to select him ahead of another keeper.All in all, Jose Mourinho went to Chelsea, did win a PL title, but left on unceremonious terms, and went off to Manchester United.Sure, he was successful , but one PL title and one Europa League is a far-cry from what he achieved at Inter and Real. Iker, clearly not the same after his injuries, had a horrendous World Cup in 2014, a stark contrast to his 2010 campaign. He eventually left for Porto, where he did not impress that much.

I guess karma caught up to both of them.

More about the Author

Sushruta Nandy is an aspiring writer, and a student of Grade 12. When he isn’t solving pointless differential equations or mugging up his Economics textbook , he write about football. He has been an Inter Milan fan for over 8 years now, but his first love was football and he loves watching it as much as he enjoys writing about it. You can get in touch with him on  Quora & Twitter